We were commissioned to produce a couple of films for the Alfred Cohen: An American Artist in Europe centenary exhibition which sadly ran for a single day in March 2020, closed early due to the COVID 19 pandemic. 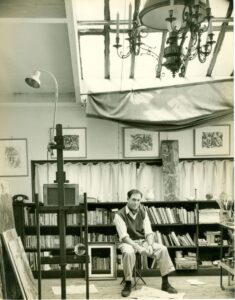 The American artist Alfred Cohen (1920-2001) won a fellowship in 1949 on graduation from the Art Institute of Chicago to come to Europe for a year. He never left, studying and living in Paris and Germany before moving to London in 1960. His acclaimed exhibitions of breath-taking panoramas of the Thames, the London Docks and powerful figures based on the Commedia dell’Arte sold out. Film stars, directors and producers collected his pictures. In the mid-1960s he moved to Kent and later to Norfolk, specialising in painting the British landscape and the Channel coasts, interiors, people, and flowers.

This was the first London exhibition of Cohen’s work since his retrospective nearly 20 years ago. It was a collaboration between the Alfred Cohen Art Foundation, the Ben Uri Research Unit (part of Ben Uri Gallery and Museum), the Sainsbury Centre, the Centre for American Art at The Courtauld Institute of Art, and the Centre for Life-Writing Research at King’s College London. The exhibition was co-curated by Max Saunders and Sarah MacDougall, and the exhibition and events programme was supported by the university’s Culture team.

The works in the exhibition can now be viewed online along with details of the accompanying book.

Both films can be seen here:

Alfred Cohen: Between Figuration and Abstraction