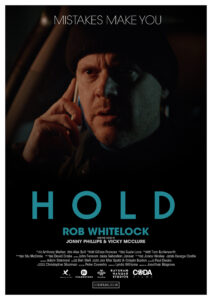 Coda Films Ltd. and Signature Pictures in association with The Princes Trust

Tommy, an out of work building contractor, faces up to the consequences when a series of phone calls expose a lie that spirals out of control. With his family in danger and everything he knows rapidly unravelling around him, he must make the toughest decision of his life.

Set entirely within the claustrophobic confines of a parked car, HOLD brings an atmospheric and tense twist on a familiar genre, starring Robert Whitelock (Informer, End of the F***ing World), Jonny Phillips (Outlaw King, Titanic) and Vicky McClure (Line of Duty, This is England).

With HOLD, I wanted to make a thriller where the characters and drama were firmly based in reality; a slice of genre film making that would be more relatable to our audience. Tommy isn’t necessarily a bad person, he’s human, fallible and in too deep, but ultimately his decisions have put his family in very real danger.

On first look this is a heist or getaway film, our protagonist in place, engine running, as the clock ticks down, but really HOLD is about the choices that we make in life and how a single decision can have serious consequences further down the road.

****
“A wonderful character-driven drama wrapped in heart pounding heist movie that will keep you right on the edge of your seat.”
UK Film Review

“Blagrove’s short is an exciting and interesting new short that looks to push the boundaries of genre filmmaking.”
Film East Blog

“HOLD, a British crime Drama/Thriller, is dark and grim, yet very human. Character driven, it has a flawed main character who is tormented over a secret possibly being exposed. Stylistically familiar yet unique in contact, it will keep you on the edge of a seat and won’t bore you with vapid and shallow genre-typical violence”.
Sara Jakubcova